In Exploring Special Purpose National Bank Charters for FinTech Companies (FinTech Charter Paper), the Office of the Comptroller of Currency (OCC) provides rationale as to why to grant special purpose national bank charters to FinTech companies. It states:

“If the OCC decides to grant a charter to a particular FinTech company, the institution would be held to the same rigorous standards of safety and soundness, fair access, and fair treatment of customers that apply to all national bans and federal savings associations.” 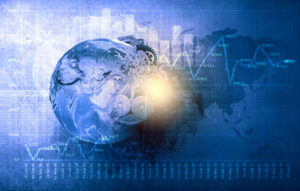 The Marketplace Lending Association responded to the OCC’s FinTech Charter Paper stating, “In launching its initiative to grant special purpose national bank charters to FinTech companies engaged in lending, the OCC has recognized the benefits that a uniform, nationwide charter can bring to consumers and businesses by allowing MLPs to take full advantage of the internet’s reach.”

As a member of the MLA, we couldn’t agree more with the importance of promoting a transparent, efficient and customer-friendly financial system by supporting the responsible growth of marketplace lending (MPL), fostering innovation in financial technology and encouraging sound public policy. However, the possibility of a national bank charter isn’t the only option FinTechs are considering when it comes to enabling bank-like functionality and services.

Last week, American Banker reported that Square, a San Francisco-based merchant services and mobile payment company, is seeking an industrial loan company (ILC) charter to empower small businesses and the underserved to participate in the economy. As noted in the article, “Square said it was encouraged by recent moves by the FDIC to encourage the creation of new banks, according to the spokesperson. The agency, which has to approve all applications for deposit insurance, recently decided to change the period of heightened regulatory scrutiny for new institutions from seven to three years.”

American Banker goes on to say, “The ILC is a controversial bank charter that critics say creates a loophole to the separation of banking and commerce, allowing firms to skirt Fed supervision. Supporters of the charter note that ILCs have been regulated successfully for decades by the FDIC and the states, including Utah, Colorado and Nevada, that have allowed such firms.”

Square’s main purpose for the charter is to extend its small-business lending business and felt the ILC charter was best suited to its structure. Orchard Platform’s Weekly Online Lending Snapshot also covered the Square news and stated, “This would allow them to offer deposit accounts, loans and other banking services to their small business customers.”

The article Payment Company Square Applies for Bank Charter does a nice job differentiating between an ILC and a bank charter:

If Square’s ILC application is accepted, the company would be able to access federally insured deposits, taking the business away from traditional banks. And given the lower operating costs of the FinTech business model (no branch locations to maintain, etc.), they can afford higher interest rates on deposits than a typical bank, enabling a stable and growing source of capital that could be used to expand lending operations. As a result, this would ramp-up competition against traditional banks from both an asset, as well as a liability perspective.

Continuing the Conversation at ABS East

Next week, the eOriginal team will descend on Miami for IMN’s 23rd Annual ABS East event. At the conference, Steve Bisbee, our president and founder, is participating on the panel titled, Trends in Online Consumer Lending: Less Tech, More Fin?, alongside thought leaders from Deloitte & Touche LLP, Darien Rowayton Bank, Kirkland & Ellis LLP, Peer IQ and Deutsche Bank. During the panel discussion, the topic of why online lenders who never considered being a bank are seeking bank charters will be discussed in depth. If you are attending ABS East, this is a must-attend session. Please also include eOriginal in your event itinerary. Our team of experts would love to chat about how we can help your organization join the digital financial ecosystem. 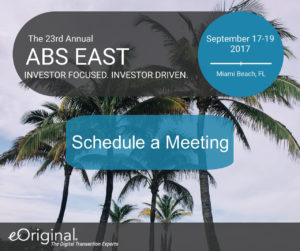